In HeavyM 1.7, we have introduced a new performance mode selection feature. It is intended to help you get the best out of HeavyM in terms of memory management, depending on the type of project you’re creating and the capacity of your graphics hardware.

You can choose a performance mode in Projection → Performance. 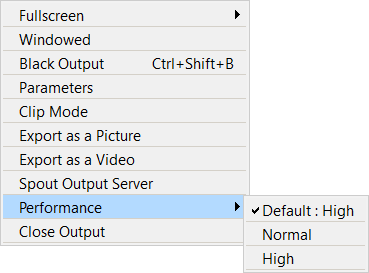 When you switch between modes, you’ll be prompted to restart the projection if one was open:

“This action requires a restart of the projection.”

If you click on “Restart Now”, the new performance mode will be applied and your projection window will close and reopen automatically (with the same size and position, don’t worry). On the other hand, if you click on “Cancel”, the mode change won’t be applied.

Understanding the difference between both modes

The performance mode impacts the amount of memory (RAM and VRAM) that HeavyM will use to display your project.

You’ll notice that there are two modes, Normal and High, and that HeavyM applies a default choice between these two. We’re going to explain the differences between these modes and what they entail in the following paragraphs.

Note: if you’re short on time and simply want to get the hang of the basics, you can read the summary in the last paragraph of this article.

Up until version 1.6, the Normal mode was the standard performance mode in HeavyM.

In this mode, HeavyM only loads the content of one sequence at a time in the memory, that of the sequence that is being displayed in the output. This is what allows HeavyM to run on computers that don’t have a lot of memory resource. And even if you have a pretty nice configuration, it’s also a good way to manage memory capacity when you have a heavy project with a lot of effects and sequences.

Unfortunately, if a sequence has a lot of content, it will take some time to load it and this can cause a temporary drop in performance. Indeed, since only one sequence is loaded at a time, HeavyM has to empty the memory and load the new content every time you switch to a different sequence. That’s why there can be some small freezes in the display when a new sequence starts playing.

Some of you have experienced them, especially in version 1.6, that’s why we’ve introduced a new mode that can help correct this issues.

In this mode, HeavyM loads and keeps all the sequences of a project in the memory at once. That way, there’s no need to load a sequence again every time you switch, so there’s no lag between two sequences.

But this means keeping a lot of data in memory, which can cause issues if your graphics hardware can’t support it. And even if you have a pretty good configuration, if you have a heavy project with a lot of effects and sequences it could still be too much.

What’s the Default mode then?

The default mode is not a mode in itself, as it represents either the High mode or the Normal mode. It has been devised as a default choice between the two, to help you with the performance setting selection. It behaves as follows:

In this case, please refer to our tutorial on how to make sure HeavyM is running on the 3D graphics card. Using the proper graphics card will also help improve performance!

Of course, you can still override the default setting and force a different mode than the default one, it’s up to you! That way, in particular if you’re having lags or freezes issues, you can try out both modes to see which one suits your project better.

However, if you try to force the high-performance mode while it’s not the default one, you’ll get the following warning:

“Do you really want to force High performance mode? Your graphics card may not be compatible with this resource-intensive mode. “

This message is here to remind you that the high-performance mode is rather intended for users with a dedicated graphics card. Indeed, as we’ve said before, a lot of memory can be required to load all sequences and if there’s not enough memory available, it will overload and HeavyM could crash.

Note: the available memory also depends on how greedy other softwares you might be using at the same time are.

What does the performance mode really affect?

As we’ve explained in the previous paragraphs, this mode only has an effect on the fluidity of the display when you switch sequences and the amount of memory (RAM and VRAM) that HeavyM uses.

Don’t worry, it won’t affect other settings and features of the software, or the resolution of your projection for example.

Note: the performance mode selection is not saved within project files, it is a global setting in the software, so it is effective in every project you open.

Let’s sum it up

If we were to summarize the difference between both modes, we could say that you should remember this:

So, if you’re having lags, you can try to switch the mode. However, if you do so, we advise you to do some tests with your project before a performance, especially if you’re using HeavyM in a professional setting. Better be safe than sorry!